Say you’re casually surfing the web and suddenly there’s a pop-up window in the middle of your screen stating “Your computer is infected! Download this NOW! or call us NOW!”.  Even if you’re savvy enough to know it’s fake, you may still get an instant headache at the thought of detecting and removing this annoying message.  If it’s the first time this has happened or if you’ve been through a virus nightmare before, your reaction may be more dramatic.

Rest assured, those annoying pop-ups are fake – 100% of the time.

The pop-up is really there, but the service they are basically demanding you download and pay for is malicious and will not solve any problems.  In fact, in most cases, it will make the problem a million times worse.  Now, Macs are not immune to malware 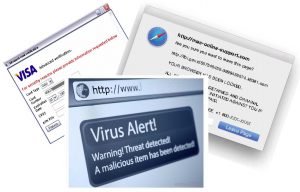 but the operating system is less vulnerable.  Sometimes, that makes Mac users more susceptible because they are not accustomed to seeing these fake warnings.  MOST malware (viruses, adware, spyware, ransomware, etc) targeted at Macs require you to take some action to allow it first.  Even if you don’t download it, or call, many times the pop-ups will continue and you will need to take some action to remove it from your system.

So where does this malware come from and how can you tell what it is?  Simply put, malware is any program whose purpose is to cause harm to your system.  There are subsets of malware, with varying degrees of harm. 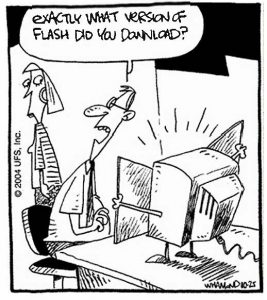 Most browsers (Safari, etc) and Mac OS will warn you if you’re opening a program from the internet (as opposed to the App Store).  If you visit sites where there is a lot of peer-to-peer networking or file sharing going on, you may consider an anti-malware that runs real time scans on your system.  If you don’t download from the internet, click unknown links in email and verify requests for personal information before giving it out, you may still want to install a “clean up” tool instead. You would run a program like this if you suspect malware.

Be sure you do your homework and read reviews from non-biased sources prior to paying for any anti-malware software.  For example, go to PC Magazine or MacWorld and then search from their site. Our techs install a free program called Malwarebytes when they clear malware from a computer to help you stay “clean” in the future.

If you have or suspect you have malware, TechRestore is here to help.  Our techs are pros at getting your computer in tip top shape, in case you’ve fallen into one of the traps listed above.