It always surprises us when people talk about Apple’s ecosystem and how brilliant it is, like it’s a 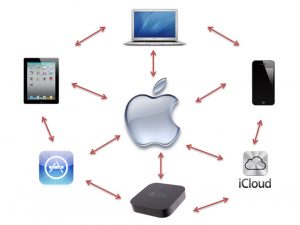 new thing.  We know that we are now, and have always been, passengers on Apple’s train.  Yes, we can each have our own room, or we can go into the club car, or we can invite other people into our room, but we are still not driving the train.

Some people don’t like giving up that ‘control’, but people who are immersed in the Apple ecosystem are really happy they don’t have to lay the tracks or pay for the gas.  All you have to do is maintain and manage your own little space.

Maybe Apple isn’t really worried about being “the top selling” laptop/desktop/phone.  The changes they have made through the years (which are often criticized at first) have proven to be beneficial to their users.  Long before SuperDrives were removed from MacBooks and iMacs, there was a gentle incentive to ditch physical media (and who doesn’t love the extra closet space CD’s used). Apple didn’t respond to that market, they created it.  So if you miss multiple ports and resist USB-C, you can be sure that soon you’ll think it’s the best thing ever.

Is it any wonder, then, that Apple appears to be bringing a lot of its component tech development in-house?  It’s an iceberg – this has been going on for years already, right under

our noses.  They are not suddenly leaping into new business ventures.  Take a look at the massive Apple Park that’s near completion after years of construction.  Just like their devices, it seemed uncalled for when we first heard about it.  Who needs that much space?!  But now … ooohhh, it all makes sense.  They have also expanded their Seattle center and other satellite offices, even in China.

We do love the Apple Ecosystem.  It has existed – by design – from the start and has expanded and evolved, and continues to grow in unexpected ways.  Like Legos, Apple devices just fit together and work (mostly) seamlessly.  And if Mac users sometimes seem fanatical, it’s just because they enjoy knowing that if there is some adjustment to make in using a new product, it will be short and well worth it.

We completely agree with AppleHolic on this: Apple has a big picture in mind.  Apple’s secrecy doesn’t mean they are stagnant and with an entire industry built on Apple rumors, it’s nice to seem them all come “magically” together sometimes.

So, whether you’re only plugged in using an iPod nano or your house, car, tv and communications are all aboard the train, we’re glad you’re here with us!  We do have a passion for Apple products and have dedicated ourselves to helping the people who use them any way we can.